It is no secret that ConnectWise has had a tough time recently. When you combine sequential critical security vulnerabilities with a seemingly uncertain future for the Automate product, it’s going to start worrying some people. As a Managing Partner of MSPGeek, I have what I feel is a distinct insight into the thought processes and decision making of many MSP partners at once. ConnectWise gets a lot of stick, especially in public places like Reddit. Usually, it’s just hot air or venting. That seems to have changed in the past month and partners seem to be starting to take affirmative action and actually moving or investigating alternate RMMs.

Personally, I don’t think any of the mainstream RMMs are ticking the right boxes at the moment. There’s a common joke saying that I often hear when it comes to the current selection of RMMs; “Pick which one you hate the least”. None of them seem to be adapting or innovating to serve the needs that have surfaced over the past five years. Things like 365 integration/monitoring, security and compliance options, Intune integration, Azure integration, auto-documentation, cloud identity management, even modern-day patch management are either extremely weak or none existent in all the products I’ve looked at. In ConnectWise Automate’s case, nearly all of that is missing. It’s not adapting to the needs of our MSP, so I have to put custom solutions in place. The Automate agent feels like it is stuck in time, perpetually living in 2005 with its delayed communication mechanisms and its ancient .NET codebase. The purpose of this post is not to ConnectWise bash, but it started off an interesting thought exercise for me. As much as I love the customizability of ConnectWise, I am not doing my job properly as CTO of my MSP if I am not at least evaluating our position. Which begs the question; how hard would it be to move to a different RMM?

How to give yourself an existential crisis

After thinking about it for 15 seconds, I curled up in a corner and cried for 15 minutes. For me at least, it would be an extraordinary amount of effort. Hundreds of scripts, at least fifty production reports, customized third-party and OS patching, custom integrated 365 and security monitoring and a whole lot more. It would be a huge project, one likely to impact on the bottom line and future of my business. Time spent migrating RMMs is time not spent on improving and innovating my actual MSP and the solutions we provide to clients. It’s a problem that has to be approached delicately, and slowly. Which brings me to the title of this post – instead of putting in a huge chunk of effort in migrating from one RMM to another, that effort should be put into reducing the reliance on RMM specific features completely, like scripting and monitoring. Then it doesn’t matter what RMM you are on.

In rides PowerShell, on its Noble Steed

Simply put, I am going to start the long and arduous process of migrating monitors and scripts into a more generic format. Here is roughly how the process works at the moment, I’ve picked a typical Automation task to demonstrate the point: 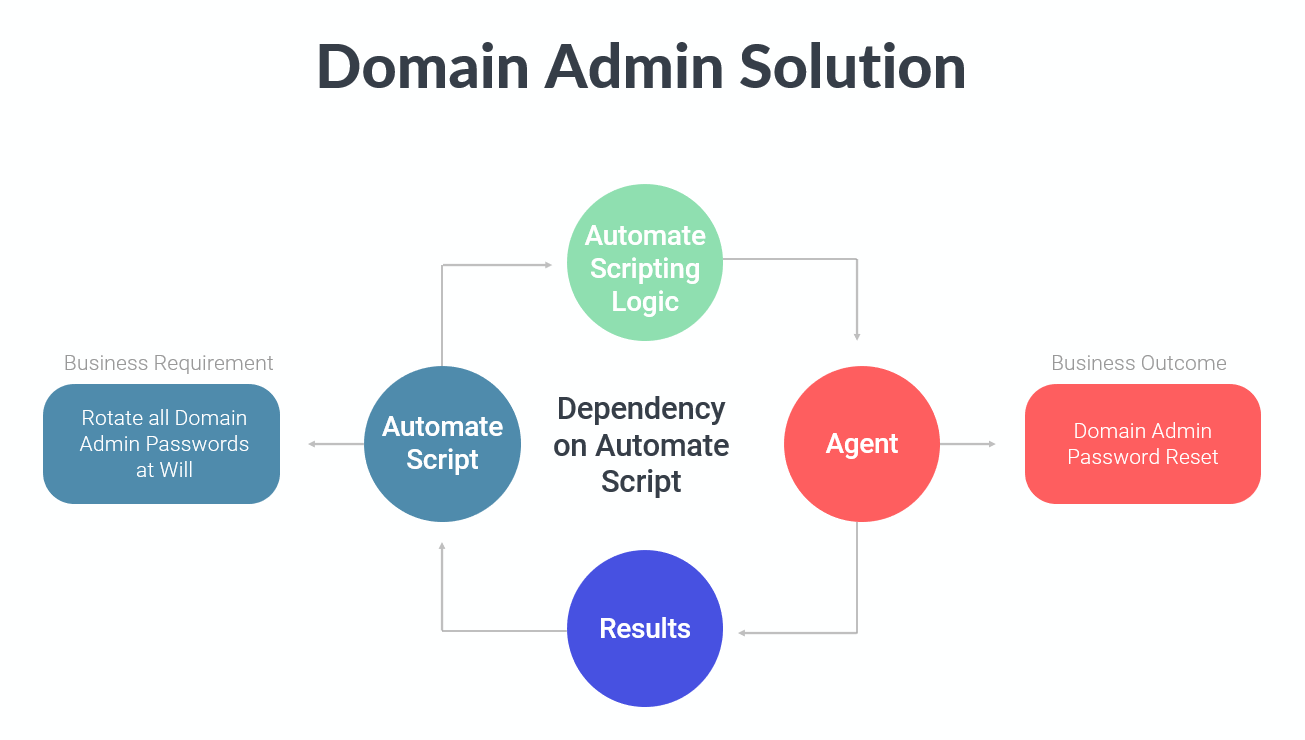 There’s a huge reliance in this model on what essentially is an Automate script. Generating a password, updating the password, checking the update was successful etc. All logic built into a platform-specific model. I can’t take that logic out of Automate with me and move it to another RMM. Or can I? I can if I move all of the scripting logic outside of the Automate script and into a PowerShell function that’s not even stored in the RMM. In this case, the RMM becomes a glorified script runner and a parser of results: 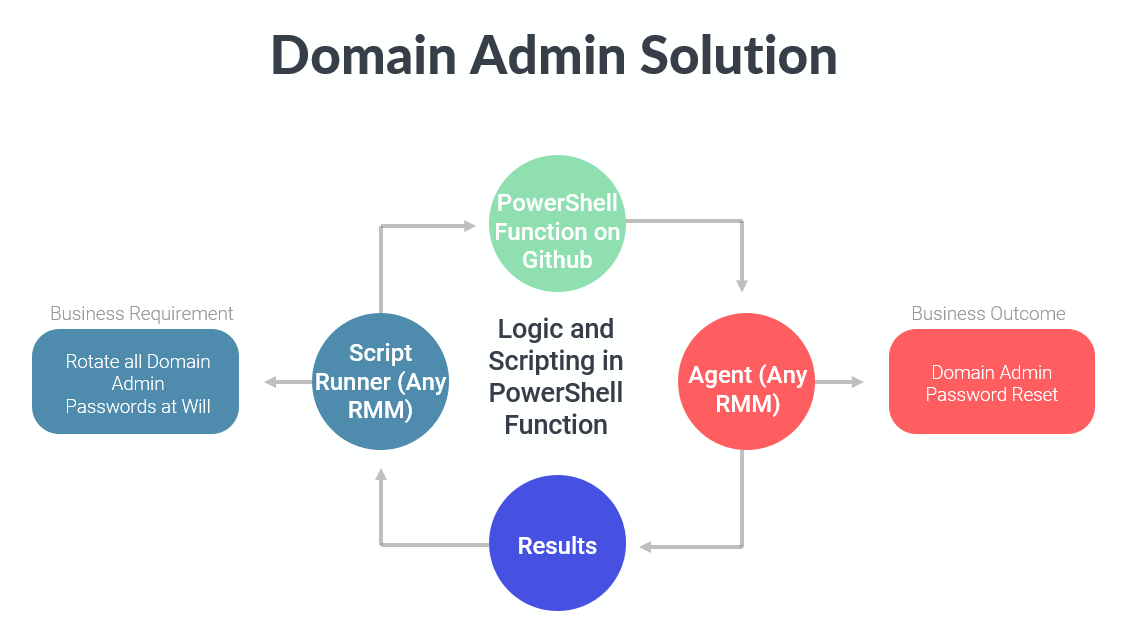 Let me explain a bit more about how this works. Firstly, we ignore the RMM completely and we write a PowerShell function to do the job. That function could look a bit like this (this is not designed to be an exhaustive example, but more to represent a structure):

We test that script works correctly and as expected outside of the RMM, then we upload it into a private repository on GitHub. Instead of now putting all the logic inside an RMM script, we do only one thing in the RMM script – we call the function directly from GitHub along with the parameters we want to use:

That’s it – you’ve successfully abstracted your business logic out of your RMM. That’s 90% of the job. If you’re not 100% sold on having the script in GitHub, simply put the PowerShell function inside the RMM script and call it at the end. You could even host the ps1 on your own Automate server and call it in the same way, just change the URL string.

The benefits of having your business logic in GitHub

You can do the same with Monitors too

In exactly the same way, you can abstract your monitoring too. This can be anything from a Registry check to a service check to anything you can imagine. If you’re in Automate, this needs to be a single line script:

In the script, you simply Write-Output the results and then set the monitor conditions inside the RMM.

This is not bullet-proof

Though this works well for lots of different types of scripts, it doesn’t work as well for others. You may need to expand the script to more than one-line in the RMM depending on what the script is doing. You may need to generate a ticket, for example, and most of the time you’d need to do this inside the RMM script. That said, most of the scripts I have that I can’t move to PowerShell because they rely on Automate functions are scripts that are fixing or checking for functionality that shouldn’t be broken in the first place, so I wouldn’t need to migrate them to a new RMM. Your mileage may vary.

Some things to consider: GitHub Security

I achieve this securely by having an organization set up in GitHub that has a number of people in it, one is an account called ic-read-only. This is the account I generate the API token in. It has read-only limited access to the private repository with the business logic in. This is an important step! The last thing you want is someone on an Agent intercepting your API Key and having full access to edit the PowerShell that all your other agents are calling.

What if I can’t write PowerShell?

This is pretty much a skill that I would expect now from any competent Windows engineer. It’s never too late to learn. Start here – this is the only book that actively sits on my desk; PowerShell in a month of Lunches

I don’t see myself moving from Automate for a while yet, but I at least feel by starting to do the above I am preparing for the future – whatever it may hold. I’d love to hear what others think about this approach, including ways it could be improved.